Skip to content
Previous Next
Mistakes – portals for discovery 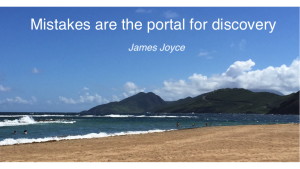 As an experienced senior leader and coach I know only too well the frustration, disappointment and shame of making a mistake. It’s that sickening feeling in the pit of your stomach when you realise with absolute clarity that you, yes you have made a mistake. But by viewing mistakes as an opportunity for you to gain new insights and learn about your leadership style can turn the experience into a positive one.

I remember being in this position, not long after I had been appointed to my first senior leadership role, when I inadvertently divulged information about a decision to a group of Head teachers before the decision had been confirmed. Having admitted the mistake, I will be forever grateful that my manager was a wise and experienced leader who accepted my apology and then asked what I was going to do about it. In other words, he held me to account by making sure that I owned the problem; he didn’t rescue me or try and intervene to resolve the situation. He treated me as an adult, respecting my judgement (despite the mistake) and believing that I was capable of sorting this out on my own. The next step for me was to attend a meeting of the affected Head teachers and explain the mistake I had made AND make it clear that it was my mistake and not the organisations. This was important because I had potentially done a lot of damage to the credibility of the organisation in terms of trust and reputation (on both counts potential gross misconduct and dismissal).

So, having admitted and taken ownership of the mistake I then had to take steps to put it right. It still makes me feel anxious writing about it, the point at which I had to face the Head teachers, say sorry and try and preserve the reputation of the organisation. That ‘tumbleweed’ moment when no one speaks and then, when they do a whole barrage of emotions is unleashed at you. Not pleasant but I knew that I had to absorb it, hold my head high and maintain a professional demeanour. It would have undone everything I was trying to put right if I had reacted to their anger and upset with me. Yes, it was bruising and it took a very long time and a lot of hard work to repair the damage to that relationship but it taught me so much.

What did I discover? Well, I learnt to always check the real culture of the organisation in terms of where power lies, particularly the decision-making process and how, who and when decisions can be communicated to stakeholders, partners and service users. It brought home to me the importance of understanding how an organisation really operates, often referred to as ‘way we do things around here’ rather than what is written in the policies and procedures. I was lucky because the organisation I worked for really did live their values by respecting their employees, trusting their judgements, and recognising that mistakes are a great tool for learning. I also learnt from the example of my manager as he could have taken me through the organisations disciplinary process as a way of holding me to account. Instead he made sure that I took full responsibility by allowing me to own the mistake and then put it right. He trusted me to do the right thing and made sure that it was this that motivated my response. Had he gone down a disciplinary route I could well have lost my job and at the very least my job prospects would have been severely damaged with that on my record. I would also have become very risk averse, and unwilling to make decisions without constantly checking with my manager. And I have seen this behaviour so often since, where people are unwilling to take a risk, where they constantly copy their manager into every email, justified as letting them know what they are doing, whereas its about the need to ‘cover their back’. I also learnt about the value of a strong supportive team; admittedly their first reaction had to be to let me get on with putting the mistake right and I felt very alone. However, when I returned from that bruising meeting with the Head teachers they made a point of coming to check that I was okay. They were genuinely concerned about the impact of what I had to do and it was at that moment I realised that they would be good people to work with in future.

I will be forever grateful for the wise and measured response by my manager to my mistake and I hope that throughout my leadership career I have shown the same qualities in the way I have managed teams and individuals when faced with a similar situation. In conclusion, my question to you is what have you already discovered or will you discover from your mistakes?